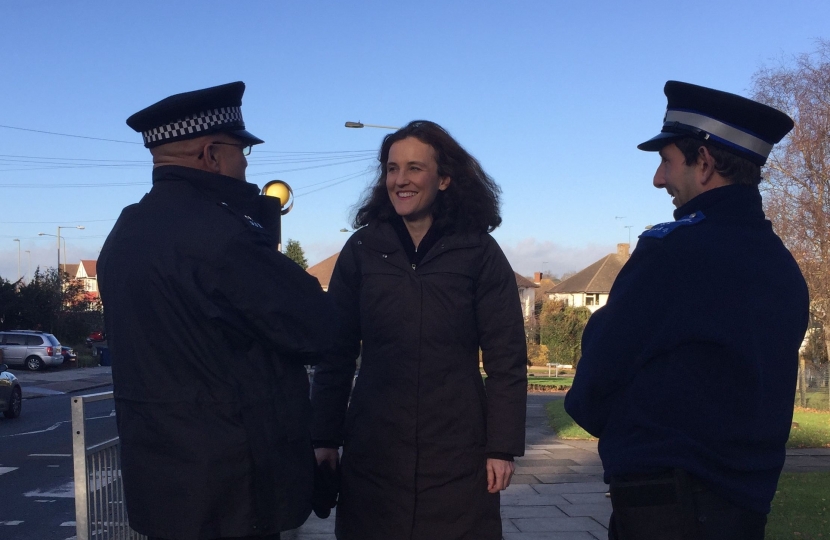 Chipping Barnet MP Theresa Villiers has welcomed extra funding to help the Metropolitan Police fight crime in the capital. In recent weeks, Theresa has lobbied the Prime Minister and the Chancellor for an increase police numbers for Barnet.

The police funding settlement for 2019/20 gives an extra 46m in Government grant funding to protect the police budget in real terms, and a further £45.7m to help with increased pension costs.

£81 million more will be available if the London Mayor opts to use a new power to add £2 a month to council tax to support policing. That would mean the total increase in funding for the Metropolitan Police next year could be as much as £172m.

“Many constituents have told me they are worried about crime, particularly burglary. This funding settlement should help address those concerns and will be the most generous since 2010,” said Theresa.

“I have made the case to ministers that more funding needs to be available for policing in London and this has been not only heard, but acted on.

“The police do a vital job in difficult and sometimes dangerous circumstances, and this funding will help them do that job more effectively.

“The police also need to ensure these new resources are used as efficiently as possible. I support the Government in asking the Metropolitan Police and other forces to employ more detectives, work to save money from back office functions to spend on the frontline, help officers be more productive by investing in digital technology, and co-ordinate work to tackle serious and organised crime.”

The Met will also receive £90m to tackle serious and organised crime threats, including cybercrime, and an additional £160m for counter-terrorism policing as part of its national policing role.

Theresa Villiers was present in Parliament for the announcement on police funding yesterday by police minister Nick Hurd. In November, she raised police funding with Theresa May during Prime Minister’s Question Time. The Barnet MP was also part of a delegation that recently met the Prime Minister to make the case for more police resources for London.

We’ve proposed a new deal to the EU that protects Northern Ireland, abolishes the backstop, and gets Brexit done.