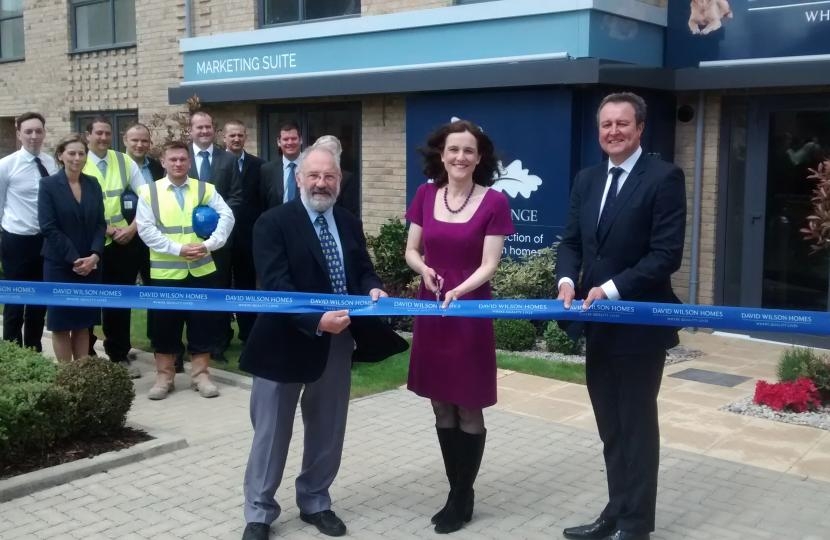 The ribbon was cut for new homes in Whetstone on Friday by Theresa Villiers, MP for Chipping Barnet. The new Oakwell Grange development is being built by David Wilson Homes, following on from engagement with the local community and elected representatives to amend the plans originally put forward for the site.

Oakwell Grange is situated off Chandos Avenue on land originally owned by religious group the Plymouth Brethren. The Brethren had been based there for some time, with a two meeting halls, cottages and a small school situated on the site. When the Brethren moved out of Barnet, planning permission was sought to allow new homes to be built on the brownfield land.

Residents were concerned about the initial proposals but thanks to the intervention of Theresa Villiers, local councillors, and others, a different set of plans were eventually submitted. Those revised plans had a greater focus on family sized homes, including houses with gardens. The development also includes social homes for affordable rent, which will be run by the Metropolitan Housing Trust, and a new community building.  Although development will continue over the next year, a number of houses have been finished and have already been sold.

Local resident Michael Jordan said: “I was sceptical about the planning application but I'm happy with what they've done with Oakwell Grange - it's progress and part of the modern world."

Cllr Brian Salinger said: “This is a welcome development in this part of Barnet, and we look forward to seeing it completed in 18 months to two years. I’ve looked round and I’m very pleased with the layout of the show house.”

Theresa Villiers said: “This is an excellent initiative and a great example of developers, local representatives and the public working together to come up with proposals which are in tune with the surrounding area.”