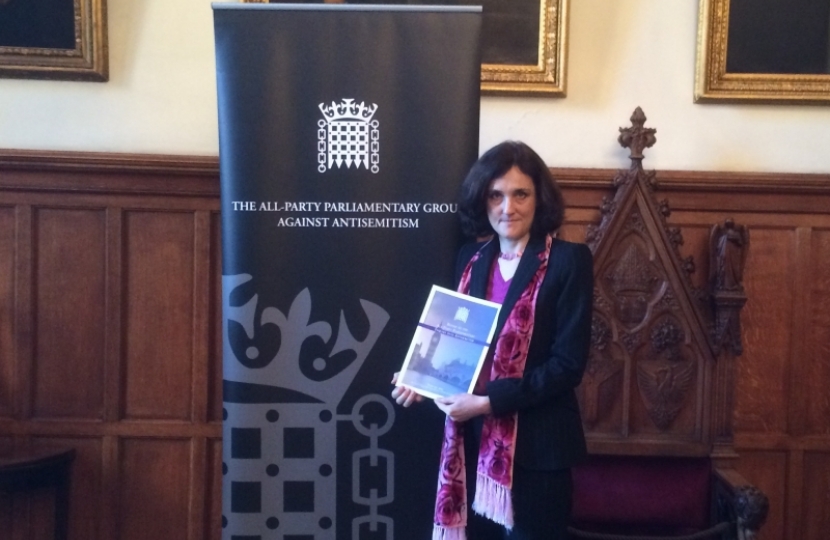 Theresa Villiers, MP for Chipping Barnet yesterday attended an event hosted by the Archbishop of Canterbury at Lambeth Palace to launch a report by the All Party Parliamentary Group Against Anti-Semitism on how to combat the rise in anti-Semitic incidents.

A strong supporter of the APPG, Theresa welcomed the report saying: “This is an impressive and detailed piece of work, giving real insight into the scale of anti-Semitism in the UK.  The recent rise in anti-Semitic attacks has concerned everyone in Barnet and it is right that this is being thoroughly investigated and analysed by a cross party group of MPs.”

“The report was commissioned by the APPG after the rise in anti-Semitic incidents following last summer’s Israel-Gaza conflict, to consider measures which could be taken to combat this completely unacceptable form of prejudice and hate crime.”

“This Government is determined to combat anti-Semitism and today’s report acknowledges the work that is already being done to do this. I believe the recommendations in the report can provide a further means to crack down on anti-Semitism. I also believe that they could provide important protection against other forms of hate crime. The Government has welcomed the report and they will take these recommendations very seriously.”

“My activity to oppose anti-Semitism goes back as far as the late 1980s and I was one of the co-authors of the first report of the APPG on anti-Semitism, back in 2006. I will continue to campaign with determination on this issue.