Villiers shows her support for the Polish community 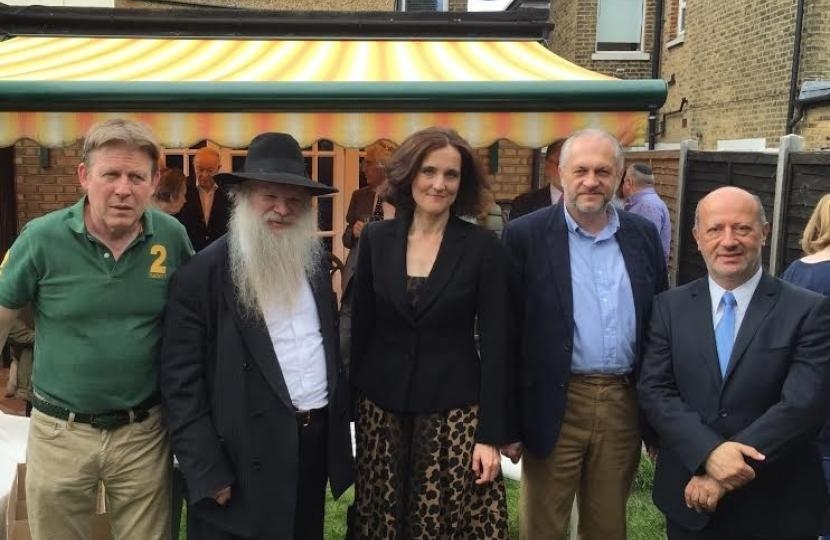 Local MP Theresa Villiers joined members of the Polish, Jewish and Muslim communities in High Barnet this weekend to show support for the Polish community in Britain and honour the work of the outgoing Polish Ambassador. His Excellency Witold Sobkow has served four years in the UK, and was one of the 2016 winners of the Grassroots Diplomat Award.

The reception was hosted by Theresa’s constituent Filip Slipaczek, who is a patron of Faith Matters, one of the country’s leading interfaith charities. Filip is also a Trustee of the Mount of Olives Cemetery in Jerusalem, of which Theresa is an honorary patron.

Theresa and Filip were joined by the Ambassador of Azerbajian, Tahir Taghizadeh, the President of the United Synagogue, Stephen Pack, representative of the Board of Deputies of British Jews, Edwin Shuker, Secretary of the Institute of Polish-Jewish Studies, Michael Mitzam, Chairman of the Muslim-Jewish Forum, Rabbi Hershel Gluck OBE, the former President of the Federation of Poles in the UK, Jan Mokrzycki, Barnet Councillor, Brian Gordon, Hackney Councillor Simche Steinbeger, Rabbis Barry Marcus MBE and Ysrael Lew, and Mayor of Barnet David Longstaff.

Theresa Villiers said: “It was heartening to see representatives from so many different local communities come together to honour the outgoing Polish Ambassador. I pay tribute to the excellent work carried out by Mr Sobkow representing Polish interests in the UK and giving great support to the Polish diaspora community here.

I took the opportunity to express my support and sympathy with the Polish community after the totally unacceptable attack on the Polish cultural centre in Hammersmith. I have visited the centre on a number of occasions in the past and was very concerned to hear of this and other racist and xenophobic incidents in recent days. I strongly condemn all such hate crimes. We are a successful multi-ethnic, multi-faith city and an attack on the Polish community is an attack on all of us and the values of diversity and mutual respect which we value so much.”

Filip Slipaczek, a chartered financial planner who also advises the Institute of Polish-Jewish Studies, said: “It was an honour that my local MP could find the time as a Minister in Her Majesty’s Government to show support to my work in the field of interfaith and intercommunity relations. Furthermore, as a UK-born Pole, I was touched by Theresa’s remarks condemning the recent unacceptable attacks on the law-abiding and hardworking Polish community, and it was nice that our fathers’ and grandfathers’ support for this country during the last war was also acknowledged.

Following Brexit, whether we were Remainers or Leavers, it is now time to come together and respect our differences and acknowledge the hard work and enterprise that many non-English communities bring to the United Kingdom.”