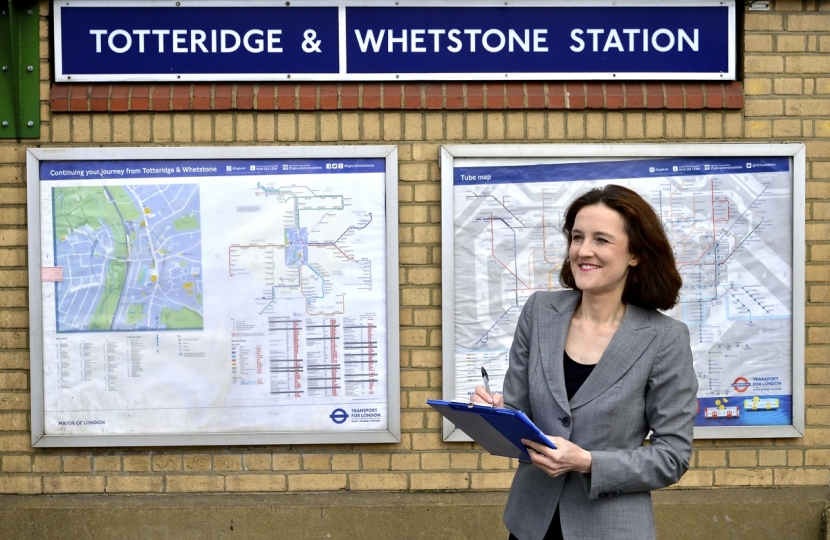 Theresa Villiers, the Conservative Parliamentary candidate for Chipping Barnet has been involved in a range of campaigns on improving local public transport over the years. She sets out some thoughts on key transport issues in the following article.

"Throughout my years of campaigning on local issues in Barnet, improving public transport has always been a priority for me because of the big impact it can have on the quality of life of Barnet commuters and all residents.

When I was first elected in 2005, I protested against the poor performance of Tubelines and Alstom in relation to the Northern Line. Back then they held contracts under Labour’s controversial PPP for the tube and services were often disrupted. The former mayor, Boris Johnson, brought the Tubelines PPP contract to an end and the performance of the line has been much improved in recent years.

During my time as Rail Minister in the Coalition Government, I helped secure funding for a multi-billion pound upgrade for the London Underground, including the Northern Line. The Coalition was forced to review every project because of the action needed to deal with the deficit we inherited from Labour; but I made the case for the London Underground and the upgrade project was saved. Since then, major work has been undertaken on signalling and other infrastructure for the Northern Line to expand capacity, improve reliability and reduce journey times.

In more recent years, I argued strongly against reported plans that the Northern Line might be split into two separate lines via Bank and Charing Cross respectively, meaning many constituents would have to change trains every day at Camden Town. I received assurances from the Commissioner of TfL that a split was off the table and was very unlikely to be considered seriously until the mid 2020s. So the danger has been averted for now, but I will continue to campaign against any split of the line in the future.

I have been keeping up the pressure on GTR to improve national rail services on the Great Northern Line which runs through Hadley Wood, New Barnet and Oakleigh Park. There have been several periods of poor service in recent months. This is not acceptable and I have protested strongly to GTR whenever services fall below the standards commuters have a right to expect.

I have also lobbied GTR and Ministers for expansion of services on the line when the new timetable is introduced in December 2018 with the completion of the Thameslink programme. GTR have proposed that off-peak services at Hadley Wood (outside the constituency but used by many Barnet residents) might be cut. I am campaigning against this.

Since we first took office in 2010, the Conservatives have committed to major improvements to our national rail system. This is the biggest rail expansion programme since the Victorian era. A new north-south high speed line is just one component of a much bigger project to enhance the existing rail network.

This includes Crossrail, which is nearing completion. I had responsibility for this project during my time as Rail Minister. During that period, an engineering-led review brought down the costs of delivery. For some years, Crossrail has been one of the largest construction projects in Europe and construction is going well.

Although the route of Crossrail doesn’t serve the Chipping Barnet constituency directly, it will deliver real benefits for residents here, as it will for all Londoners. The project will provide a 10% uplift in London’s rail transport capacity. Northern Line users from Barnet will be able to change on to the Elizabeth Line (the new name for Crossrail when it joins the London Underground rail network) at Tottenham Court Road. This will make journeys through central London faster and less crowded. It will also deliver better connections to Heathrow and Canary Wharf.

Progress is being made on Crossrail 2. This is a project which has been under discussion for some years and the plans include a line to New Southgate station, which would benefit the Barnet residents who live nearby. Land has been set aside for this project. Whilst it is not yet clear whether or when it will go ahead, in 2015 the Government committed substantial funds for a detailed evaluation of the project.

The bus network is vitally important to us here in Barnet. I have taken up the concerns of residents with the Mayor and TfL many times regarding different aspects of the local bus network. I have also taken part in debates in Parliament on bus services.

I was alarmed to learn of a threat to the 107 bus which provides a crucial connection through the constituency between the stations at New Barnet, High Barnet and Borehamwood. Hertfordshire County Council part-funded the route for many years but announced it was withdrawing all support, placing the service in serious jeopardy. I spoke directly to senior figures at TfL. I stressed with them how vital it was that the service continued. They subsequently confirmed that they would meet the funding gap left by Herts CC and the route was saved.

I have also worked with TfL on getting modern cleaner vehicles into the London bus fleet. For example, I played a part in ensuring that TfL ordered more of the new ‘Boris Bus’ built by Wrightbus in Northern Ireland to replace the much-loved Routemaster which served the capital for several decades.

The public transport system in London is supported by the grant the Mayor and TfL receive from central government. The Government has also been providing funds to cleaning up the bus fleet to tackle air quality problems. I believe that tackling pollution is vital and the funds supporting cleaner buses are playing a helpful role in that.

There is more to be done and I will continue to press for further action to improve air quality. However, we must take care to find a way to do this which does not to overburden small local businesses. Taking up the concerns of a local business who contacted me, I made this point in Parliament just a few days before dissolution took place.