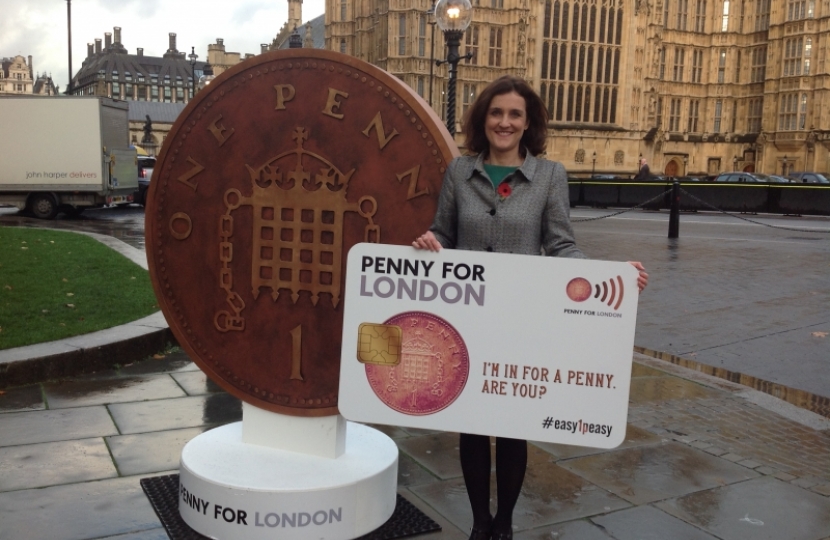 By registering their contactless debit or credit card with Transport for London, Londoners can donate one penny (or more if they wish) every day they travel on London Underground, bus, tram, DLR, London Overground, and National Rail services that accept Oyster. Proceeds will benefit disadvantaged young Londoners via Mayor’s Fund for London and other London children’s charities.

Theresa Villiers has urged her constituents to register with the ground-breaking new scheme.

Theresa said: “With Penny for London, Boris is revolutionising charitable giving. This 21st century reinvention of the charity collection tin will help transform the life chances of young Londoners from disadvantaged backgrounds.”

“This innovative scheme could mark a step change in how we donate to charity, harnessing the huge potential of new technology and contactless payments that now total into the millions.”

The micro-donation back-office technology that makes Penny for London possible has been funded and developed by Barclaycard, who have played a key role in enabling Transport for London to establish contactless payments across its transport network. TfL operates Europe’s largest single payments system with over 5 million contactless journeys in the first month that the facility was made available.

Every penny donated by the public will be used by Penny for London to benefit young Londoners via the Mayor’s Fund for London charities and other not-for-profits. If 100,000 people sign up to the scheme in 2015, Penny for London is set to raise over £1 million for good causes. If 1-in-10 Londoners register the amount donated every year could rise to over £15 million.

Many of London’s leading organisations have come together and donated time and expertise to help bring Penny for London to life, including the GLA, Hogan Lovell, London Evening Standard, Magic 105.4 and Kiss FM, M&C Saatchi, Reward Insight and Zone.