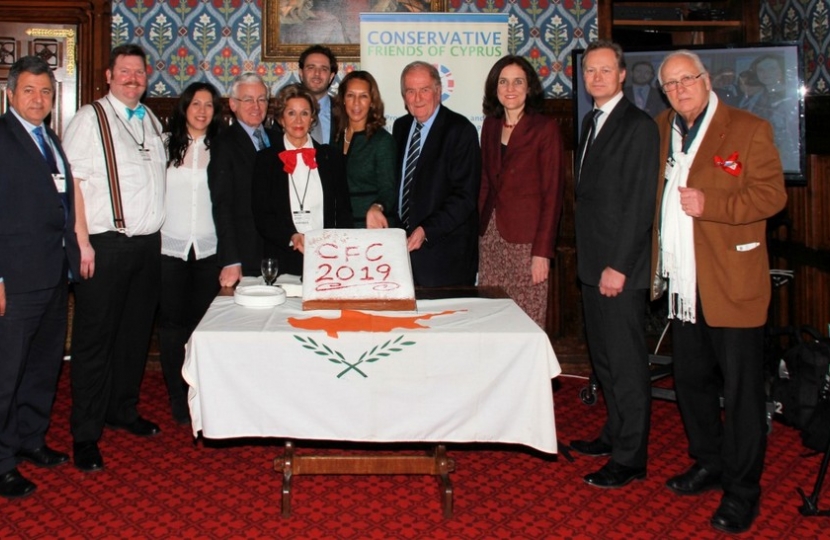 For the third year in a row, Theresa Villiers, MP for Chipping Barnet and long-time campaigner for a united Cyprus, hosted a Vasilopita New Year celebration in Parliament on Monday.

Many leading members of the Cypriot community were among the guests: His Excellency the High Commissioner for Cyprus, Euripides Evriviades; Cllr Jason Charalambous, Chair of Conservative Friends of Cyprus; broadcaster and journalist, Doros Partasides; and businesswoman, Andre Chris. One of the most popular highlights of the evening was a performance from musician, Nikos Savvides.

In her speech to the gathering, Theresa Villiers pledged to continue her 20 year long campaign for justice and freedom for Cyprus.

Speaking after the event, Theresa said “I am hosting this celebration to give my colleagues in Parliament the chance to learn more about Cypriot culture. The Cypriot diaspora in Britain are a vibrant flourishing community and it is important for MPs to be aware of that success story.”

“Coming together for a traditional New Year Vasilopita blessing ceremony also provides an opportunity for Conservative MPs reaffirm their support for the Cyprus cause. It is now 20 years since I first began campaigning for a fair and balanced settlement in Cyprus to reunite the island. I will continue to support freedom for Cyprus and campaign for the end to the Turkish military presence there.”

Theresa thanked Cllr Jason Charalambous, Cllr Maria Zavros, Doros Partasides and Andre Chris from Conservative Friends of Cyprus for organising the Vasilopita ceremony. She also thanked Peter Petrou for his generous sponsorship of the cake and refreshments. The cake was baked by Neo’s in Wood Green and received many complements.

Today we have published our Covid-19 UK Vaccines Delivery Plan, setting out how we plan to deliver the biggest vaccination programme in British history, to protect all those who need it most as quickly as possible.