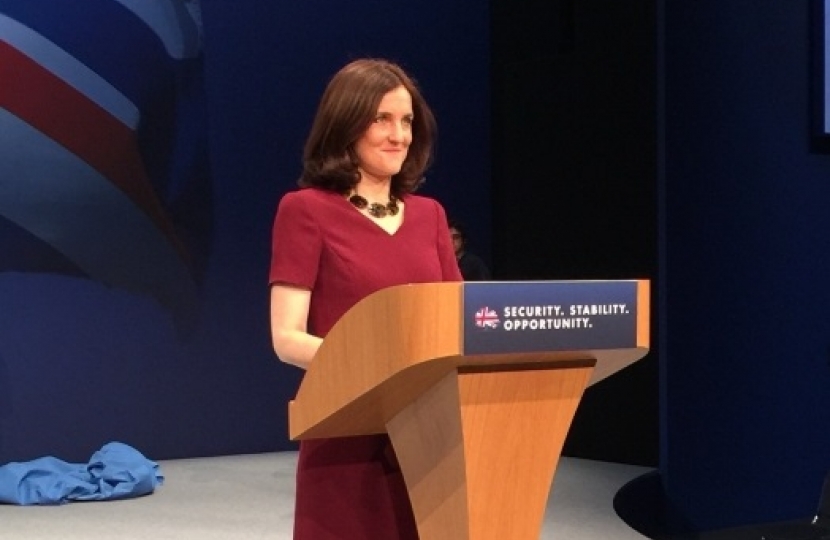 This morning, Theresa Villiers MP or Chipping Barnet, addressed a packed session of the Conservative Party Conference in Manchester about recent events in Nothern Ireland.  This is the speech she gave:

It’s a great privilege for me to deliver my fourth party conference speech as Secretary of State for Northern Ireland, and of course I’m delighted that for the very first time, I’m addressing you as part of a majority Conservative government following the election victory which every single pundit and pollster said wasn’t going to happen.

n.On the 7th May we were given a mandate to govern throughout the whole of our United Kingdom

We’re doing so as a One Nation government committed to bringing our country together.

That includes Northern Ireland, where we will deliver our manifesto commitments and continue the political journey first begun by a Conservative Government twenty years ago.

That’s a journey towards a more peaceful, stable and prosperous Northern Ireland … where working people have the chance to get on to the best of their ability, regardless of their community background…a Northern Ireland which is secure within the UK on the basis of consent and which we want to be a place no longer defined by its divided past, but instead by its shared future.

This time last year I stood before you and acknowledged that the devolved institutions were in difficulty, that political relationships were being damaged by disagreements on matters like flags, parading and the past, and that a budget dispute threatened the whole future of the Stormont Executive.

My realistic assessment was the time had come for a fresh round of cross party talks, and these began shortly afterwards with the five main Northern Ireland parties, and the Irish Government on matters falling within their responsibility

The talks ran for 11 weeks and there were many times when it seemed that a successful outcome was unachievable. But after a final 25 hour long stretch of negotiations, the Stormont House Agreement was reached on 23rd December.

That Agreement has been widely acknowledged as a landmark achievement, including by the President of the United States and we can take pride in the fact that it was a Conservative-led Government which secured it.

The Agreement sets out a way to make progress on some of the most difficult issues facing Northern Ireland today, many of which have eluded previous attempts at negotiation

It provides a clear path to putting the finances of the Stormont Executive on a sustainable footing for the future.

It offers a way forward on flags and parades.

It would establish broadly based institutions to help address the legacy of the past offering better outcomes for victims and survivors, institutions which are to be rooted in principles of fairness, balance and impartiality.

And it contains measures to make devolution work better, including an official opposition at Stormont for which we Conservatives have long argued.

All of this was underpinned by a generous funding package that would give the Executive £2 billion in extra spending power.

But as that great peace process veteran, George Mitchell, reminded me earlier this year getting an agreement is about 20% of the job. The other eighty per cent is getting it implemented.

For our part the Government is determined to do exactly that.

To take forward much needed public sector reform, we’ve released funding for the voluntary redundancy scheme contained in the Agreemen

Today I want to give you these assurances in relation to that legislation.

As our Northern Ireland manifesto made very clear … as we look back at the history of the Troubles, we in this party will never accept any form of equivalence between the police officers and soldiers who put their lives on the line to protect people from harm and defend the rule of law, with the terrorists who waged a thirty year campaign of violence to inflict harm and subvert the rule of law.

We will never accept any attempt to re-write history or legitimise the actions of those who pursued their aims by the bullet or the bomb.

And we will not countenance any form of amnesty for those suspected of criminal behaviour.

Under this Conservative Government the law will always take its course without fear or favour and the Bill we introduce will be wholly consistent with that fundamental principle.

And I have to say that many will view with grave concern the fact that, as recently as August, the leader the Labour Party have just elected was asked five times in an interview to condemn IRA terrorism and five times failed to do so.

And while the Shadow Chancellor might have issued a carefully worded apology for the hurt caused by his comments on the IRA, I say it’s time he retracted in full his call to honour IRA terrorists and admit that he was entirely wrong ever to have made that statement in the first place.

The Conservative manifesto commits us to working with all parties to ensure everyone fulfils their obligations under the Stormont House Agreement.

But progress in the Northern Ireland Executive stalled in March when the two nationalist parties withdrew their support for crucial provisions on finance and welfare reform.

We are clear. The Government will not fund a more generous welfare system in Northern Ireland than it does in the rest of the UK

There is no more money.

Without welfare reform and efficiency measures to deal with in-year pressures, the Executive’s budget simply does not add up.

As a direct result, NHS waiting times are already getting longer and the pressure will only increase in the weeks to come.

The Government cannot stand by and let this situation drag on indefinitely, with Stormont increasingly unable to deliver key public services.

That’s why I have confirmed that we’re prepared to legislate at Westminster for welfare reform in Northern Ireland, if that becomes necessary.

It would be a last resort, it’s an outcome we’re striving to avoid.

And that is one of the main reasons why we acted swiftly to reconvene the intensive cross party talks now underway once again to try to break the deadlock.

It’s too early to say whether they’ll succeed, though I sense a genuine willingness on all sides to make progress.

But time is short.

Unlike last year, we simply don’t have the luxury of endless long hours of discussions stretching on and on until Christmas.

One only has to look round Europe to see the problems caused when an administration cannot live within its budget and the harsh impact that can have on some of the most vulnerable in society.

Replaying that scenario in Northern Ireland would stretch political relationships within the Executive well beyond breaking point.

There’s a real risk that those taking a hard line against welfare reform will end up running the devolved institutions into collapse as collateral damage.

A return to direct rule would be a severe setback after everything that’s been achieved over recent years and we are doing all we can to prevent it.

What Northern Ireland needs is an effective devolved power-sharing government that is capable of making the kind of difficult choices on spending priorities, welfare and public sector efficiency with which more or less every other administration in the developed world has had to grapple in the years since the crash of 2008.

That’s what we’re striving to achieve.

But these talks aren’t just about implementing the Agreement, crucial though that is.

In recent months the fallout from two brutal murders in Belfast has highlighted the continued presence of paramilitary organisations and the involvement of some of their members in criminality and organised crime.

Let’s be clear. Paramilitary organisations have no place in a democratic society. They were never justified in the past. They are not justified today. And they should disband.

So a second key aim of the talks is to find a way to bring an end to this continuing blight on Northern Ireland society.

These are very serious matters, as is the continuing terrorist threat from dissident republican groupings who maintain both lethal intent and the capacity to mount lethal attacks.

And I would like to put on record today the deeply felt gratitude of this Government, and this party, for the outstanding work done by the Police Service of Northern Ireland in defending the community from terrorist attack.

There is so much to be positive about in today’s Northern Ireland.

After being hit hard by Labour’s Great Recession, the economy there is growing again, expanding opportunity for hard working people.

There over 32,000 more people in work than when we came to office in 2010, all now given the security of a pay packet to support their families.

Belfast is one of the most attractive destinations in the country for Foreign Direct Investment.

Year after year, Northern Ireland’s young people outperform England and Wales at GCSE and A level.

And last month county Fermanagh was officially named as the happiest place in the United Kingdom.

So in conclusion, I consider myself to be immensely lucky to have been given the chance to serve as Secretary of State for Northern Ireland, and whilst there are times when the situation looks grim and the divisions seem impossible to bridge, there three reasons why I approach this latest round of cross party talks with hope and even a glimmer of optimism.

Firstly, I have an outstanding team around me including Ben Wallace, Andrew Dunlop, Charles Elphicke and Rebecca Harris and Jonathan Caine who grapple with all the many challenges thrown at them with both dedication and enthusiasm.

Secondly, I report to a Prime Minister whose very real affection for Northern Ireland and its people means that he has been unstinting in his support for all the painstaking work needed to keep the political process up and running despite the bumps in the road of the last few years.

And thirdly, and most importantly of all, I believe that Northern Ireland’s leaders do want to make the political settlement work, and they do want to find a way to resolve the two crucial questions about which I have addressed this conference today.

Success or failure over the coming days lies in their hands.

They have rightly received praise around the world for all that they achieved in reaching the 1998 peace settlement which has transformed life in Northern Ireland for the better.

If we are to build a brighter, more secure future for everyone, now is the time to show that same spirit again.

I believe that they can do it, a resolution is possible, and I will be working with perseverance and determination to see that happen.