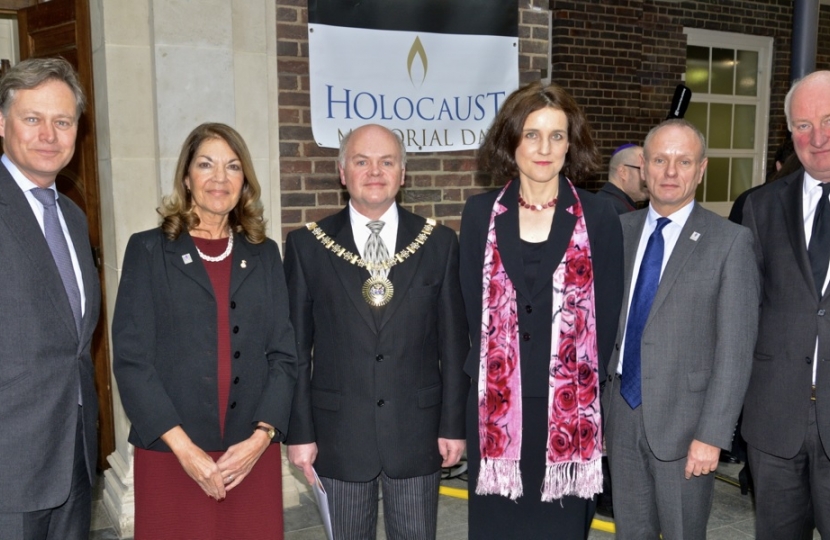 Residents across Barnet, MPs and councillors came together this Sunday to pay their respects to victims of the Holocaust at Barnet's annual Holocaust Memorial Day ceremony. Leader of the Council, Richard Cornelius, gave a short speech after a welcome address from Mayor of Barnet Cllr David Longstaff. Attendees then heard readings, prayers and psalms from Holocaust survivors, pupils from St Michael's Catholic Grammar School, the Barnet band and the Alyth Youth Singers.

Theresa Villiers, MP for Chipping Barnet, said: “For many in Barnet the Holocaust is not ancient history but something which had a huge impact on them or their relatives. It is always moving to hear speakers at this annual Barnet event reflecting on the Holocaust and paying tribute to its millions of victims. Holocaust Memorial Day is more than a commemoration, it is a reminder not to let the horrors of the past happen again.

“All attendees heard the Barnet Statement of Commitment: to ensure the Holocaust has a permanent place in our nation’s memory, to strive to ensure that future generations are aware of the Holocaust and all acts of genocide, to do our utmost to make sure that the lessons learned from these events are fully understood.”

Cllr David Longstaff said: “Barnet’s Holocaust Memorial Day commemoration was a very moving experience and an opportunity for us all to remember all those who lost their lives in the Holocaust and in other genocides.

“The theme of this year’s commemoration prompts us to reflect on how life can go on in the aftermath of the Holocaust and other atrocities and asks how we move forward, rebuild lives and communities and what we need to do to live in peace.”