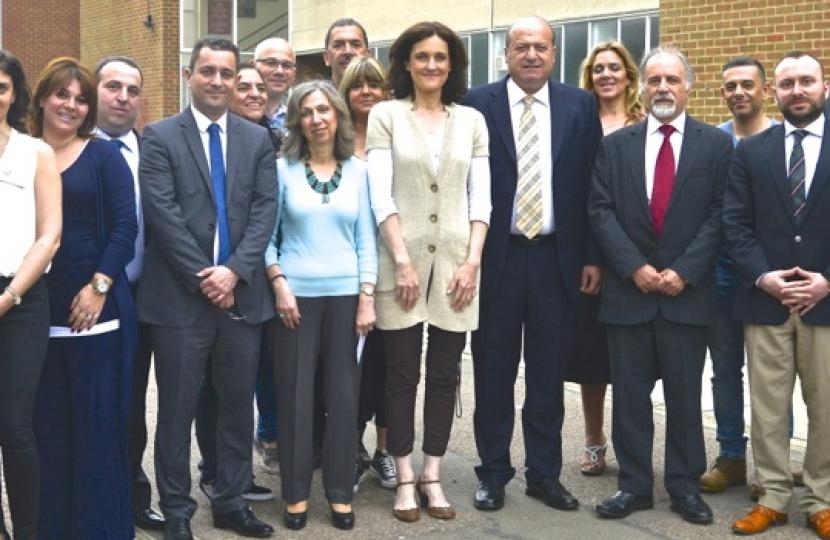 Theresa Villiers, MP for Chipping Barnet, has welcomed the news that the Department of Education has saved A Level qualifications in Greek and other minority languages from the threat of abolition. For many months, a range of language A levels had been under threat because exam boards had proposed withdrawing them.

Theresa Villiers, David Burrowes, Matthew Offord and Mike Freer all listened to the concerns of the Cypriot community and Greek schools in Barnet and Enfield. They lobbied the Schools Minister, Nick Gibb and Education Secretary, Nicky Morgan. Conservative Mayoral candidate, Zac Goldsmith also offered his support to the campaign. Now Mrs Morgan has confirmed that Greek A Level will continue to be offered, following an agreement with Pearson.

Theresa Villiers said: “This is great news. I and my Conservative MP colleagues in north London have worked hard to achieve this result and we had great support from Zac Goldsmith too. Abolishing the qualification would have deprived many young people in the Cypriot community of important educational opportunities. Loss of the A Level would also have seen many successful Greek Schools close their doors. That would have damaged cohesion in the Cypriot community where Greek schools play a key role.”

“I would like to thank Manor Hill Greek School, KES, OESEKA, the Cyprus Educational Mission, the Greek Parents' Association, the Federation of Educational Societies of Greek Cypriots in England and Wales, the Educational Committee of the Greek Orthodox Archdiocese of Thyateira and Great Britain and other members of the Cypriot community for their hard work in ensuring that the Government listened to their concerns and secured the future of this important qualification.”