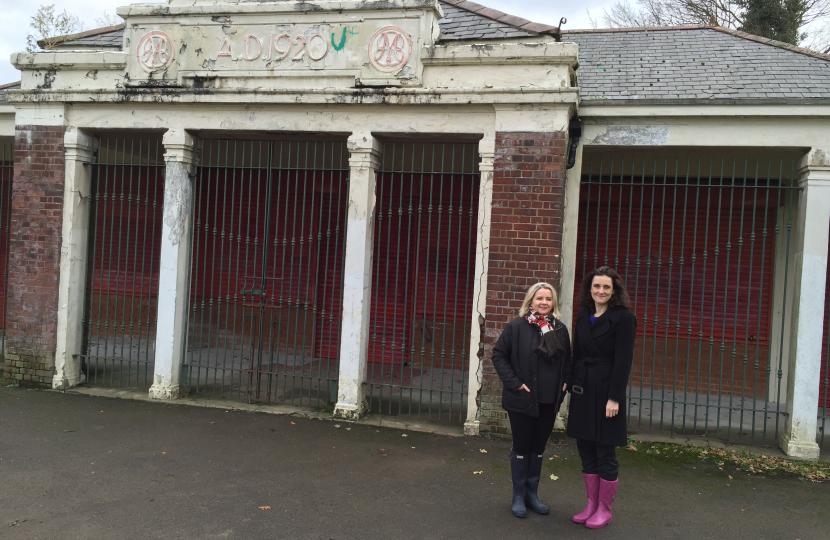 Theresa Villiers has stepped in on behalf of local residents Anne Maher and Maria Hanna, who are hoping to open a café in the disused brick pavilion in Tudor Park. The two businesswomen first approached the Council back in 2012, when the pavilion was advertised as a potential business venue. The pair signed heads of terms and paid a deposit of £2,000, only to be told suddenly that the building was no longer considered a suitable place for the cafe they were proposing. Over three years later, the building remains largely unused and increasingly dilapidated.

Theresa intervened in the case after the two women came to her surgery in September 2015, visiting the park with them to hear about their plans and raising their proposal with the Chief Executive of Barnet Council, Andrew Travers. Anne and Maria have also received support from High Barnet ward councillor, David Longstaff. As a result there is some sign of the case moving forward and Theresa, Maria and Anne will be meeting with Barnet Council's Parks Department very soon.

Theresa Villiers said: “This is excellent initiative which would benefit the community. Setting up a café would renovate an attractive heritage building which is increasingly dilapidated and turning into eyesore. It would also breath new life into Tudor Park and encourage more people to use this little gem hidden away in High Barnet. Having been given a provisional go-ahead in 2012, Maria and Anne have never been given convincing reasons why the building was suddenly deemed unsuitable for use as a cafe."

"There is no reason why a cafe cannot co-exist with continuing use of the pavilion by cricketers on match days. There should be space for both. I would have thought any safety issues resulting from establishing a cafe near a cricket pitch can be managed just as they are in hundreds of cricket clubs around the country. I believe that Anna and Maria could turn the pavilion into something special, and everyone involved should grab the chance with both hands."