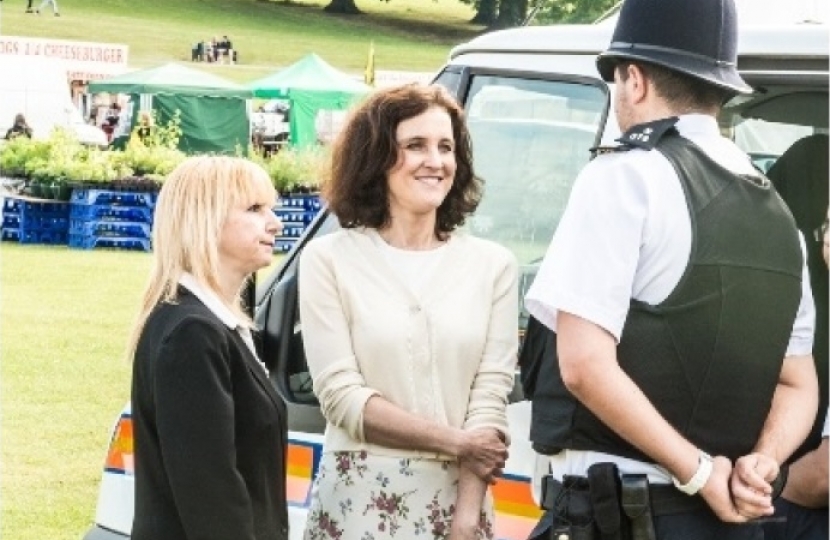 Theresa Villiers, Conservative candidate for Chipping Barnet, has written the following article in response to queries from voters in Chipping Barnet about cutting crime.

Supporting effective measures to tackle crime have been a key priority for me during my ten years as MP and would be again if I am re-elected on 7th May.

I would like to pay tribute to all of Barnet’s police officers who do a fantastic job, particularly our local neighbourhood teams. I would also like to thank all those volunteers who make up groups such as Police Community Action Panels and Neighbourhood Watch Committees.

Last week I was able to attend a meeting organised by Barnet Boroughwatch on crime prevention. I was hugely impressed that several hundred people cared enough about their community to turn up to discuss ways they could help prevent crime. As Borough Commander, Chief Superintendent Adrian Usher said at the meeting, one of the most highly effective ways to prevent crime is for neighbours to keep an eye out for anything suspicious in their streets.

Crime has fallen by a fifth across the country since 2010, according to the independent Crime Survey and is at its lowest point since records began. It has fallen by 15% in London and 12.7% in Barnet.

Over £30m has been seized from London’s criminals in last 4 years. The Mayor’s office is on course to make around £600m of savings from the Met budget by reducing overheads, releasing underused assets and reforming the Met structure and the back office to make it more similar to other forces. £292m has been raised from property sales in the last two years to invest in frontline policing. On top of this, £370m has been made from the sale of New Scotland Yard (£120m more than the asking price). Since 2012, over 700 residential units have been created in sites vacated by the Met, supporting between 2,000 and 3,000 jobs. Five former police stations are becoming free schools, one will become a technical college. That does not include High Barnet police station. That was on the original list for closure but I lobbied succssfully to save it.

The Mayor has delivered on his pledge to take officer numbers up to 32,000 and 2,000 officers have been redeployed from the back office to the frontline. I campaigned for our neighbourhood police teams to be set up and I fought successfully for them to be retained, despite austerity measures and reduced budgets.

All this has been achieved despite reduced budgets imposed because of the pressing need to deal with the deficit we inherited from Labour. Thanks to Conservative Home Secretary, Theresa May, the Conservatives have introduced comprehensive reforms to policing. We have increased the proportion of officers working on the frontline, and cut 4.5 million hours of police paperwork, something I promised we would do when I stood for re-election in 2010.

We have cut back the excessively long list of targets Labour gave the police and given Chief Constables a clear and straight forward target to cut crime. We have reformed stop and search, strengthened the police inspectorate, and set up the College of Policing to improve professional standards.

We have also dramatically increased transparency and understanding of crime levels through crime maps, giving information on every area instantly accessible through the internet.

However, there is always more to do. In particular, no matter how much success there is in reducing burglary, this will always be a distressing experience for anyone who is a victim.

I am also gravely concerned about hate crime and anti-Semitism and welcome the additional security funding promised by David Cameron for synagogues and Jewish schools and community buildings. I was deeply concerned when the Somali Bravanese cultural centre in Muswell Hill burnt down in an attack. This had all the hallmarks of a hate crime and I have been working to ensure that the Somali Bravanese Welfare Association gets a permanent new home to replace the building which was burnt down.

Some of the proposals set out in the Conservative Manifesto to maintain this successful record of cutting crime include the following:

“We will carry on making every community safer, even when resources are tight. We will continue reducing paperwork, increasing sentence lengths for the most serious offences, and making sure that prisons are places of rehabilitation.

We need to complete our revolution in the way we manage offenders in the community, using the latest technology to keep criminals on the straight and narrow. And we must also become smarter when it comes to crime prevention, dealing with the drivers of crime such as drugs and alcohol. So we will focus not only on punishment, but also on rehabilitating offenders and intervening early to prevent troubled young people being drawn into crime.”