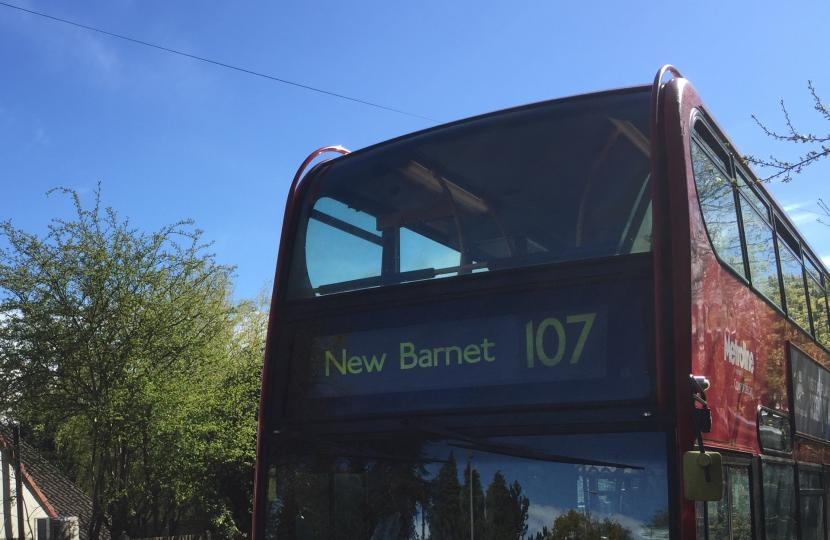 Theresa Villiers, MP for Chipping Barnet, has welcomed the news that the threat hanging over the 107 bus service has been lifted. The future of the route had been thrown into doubt after Hertfordshire County Council withdrew funding. The 107 runs outside the Greater London boundary and has been supported by Hertfordshire for many years. In a letter to Mrs Villiers, Transport for London have confirmed that the future of the 107 is secure.

Theresa Villiers said “I was very worried when I heard that the future of the 107 bus was under threat. I use the 107 and I know many of my constituents do as well. It is a vital link between three rail lines, the Northern Line, at High Barnet, the Great Northern mainline rail route at New Barnet, and the Thameslink at Elstree and Borehamwood.”

“I emphasised the importance of the 107 route with both Hertfordshire County Council and with Transport for London. I raised my concerns directly with Leon Daniels, Head of Surface Transport, and Mike Brown, Commissioner for TfL. I have now received confirmation from TfL that they have reviewed the route and retained the contract with the operator Metroline. They have told me that they have no plans to change the service and the next review will not take place until 2021.”

“At a time when TfL are being asked to make significant savings, this is really good news. I very much welcome their commitment to the 107 bus route.”